Steven M. Glazer holds a B.S. from Columbia University, and a B.H.L.
and M.H.L. from the Jewish Theological Seminary, where he was ordained
in 1970. He received a D.H.L. from the Hebrew Union College – Jewish
Institute of Religion; and, in 1996 he was awarded an honorary D. D.
from the Seminary.

During more than forty years in the pulpit rabbinate, he has served
congregations in Lebanon, Pennsylvania; Birmingham, Alabama; Paterson,
New Jersey; and Herndon, Virginia.

He has a taught at many colleges and universities including the Jewish
Theological Seminary, George Mason and Baltimore Hebrew Universities,
and the Smithsonian Institution’s Resident Associates Program. He has
also served as Visiting Scholar at Harvard Divinity School and the
Oxford Centre for Hebrew and Jewish Studies, and currently teaches at
George Washington University. 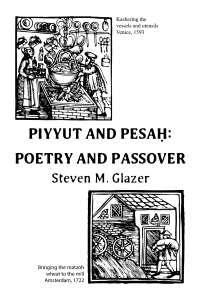